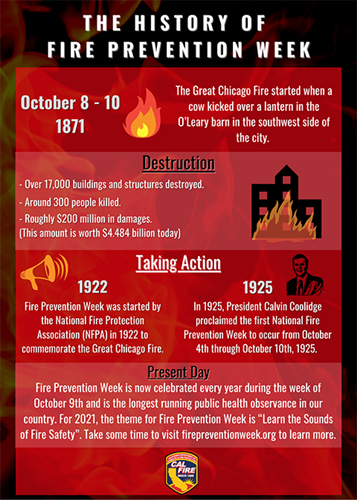 The History of Fire Prevention Week

Fire Prevention Week was started by the National Fire Protection Association (NFPA) in 1922 to commemorate the Great Chicago Fire of 1871. Fire Prevention Week teaches children and adults how to stay safe in the event of a fire. In 1925, President Calvin Coolidge proclaimed the first National Fire Prevention Week to occur from October 4th through October 10th, 1925. President Calvin Coolidge stated that, “This waste results from the conditions which justify a sense of shame and horror; for the greater part of it could and ought to be prevented… It is highly desirable that every effort be made to reform the conditions which have made possible so vast a destruction of the national wealth”.

The Great Chicago Fire burned between October 8th to October 10th, with most of the damage done on October 9th. The fire caused roughly $200 million in damages, killing around 300 people, and destroying over 17,000 buildings and structures. The consequences were more than just fire damage itself, as martial law had to be declared after an outbreak of looting and lawlessness. The fire was said to have started when a cow kicked over a lantern in the O’Leary barn in the southwest side of the city. Fortunately, in 1997, the Chicago City Council passed a resolution exonerating Catherine O’Leary, as well as her cow. Today, the Chicago Fire Department Training Academy is located on the site of the O’Leary property where the fire started.

Did you know that there was a fire that occurred during the same time frame as the Great Chicago Fire in 1871? On October 8, 1871 the Peshtigo Fire swept through northeast Wisconsin. The Peshtigo Fire is the most devastating forest fire in American history, claiming 1,200 lives and scorched 1.2 million acres. The damage estimate was at $169 million for the time, which would equate to over 38 billion dollars in 2021. 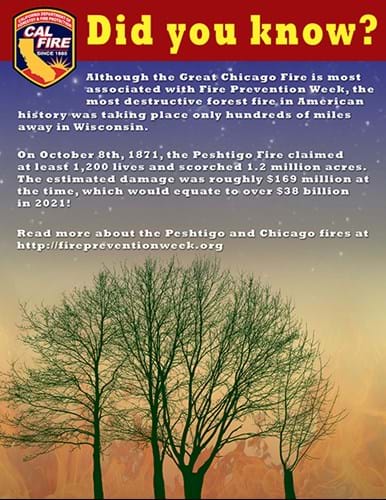